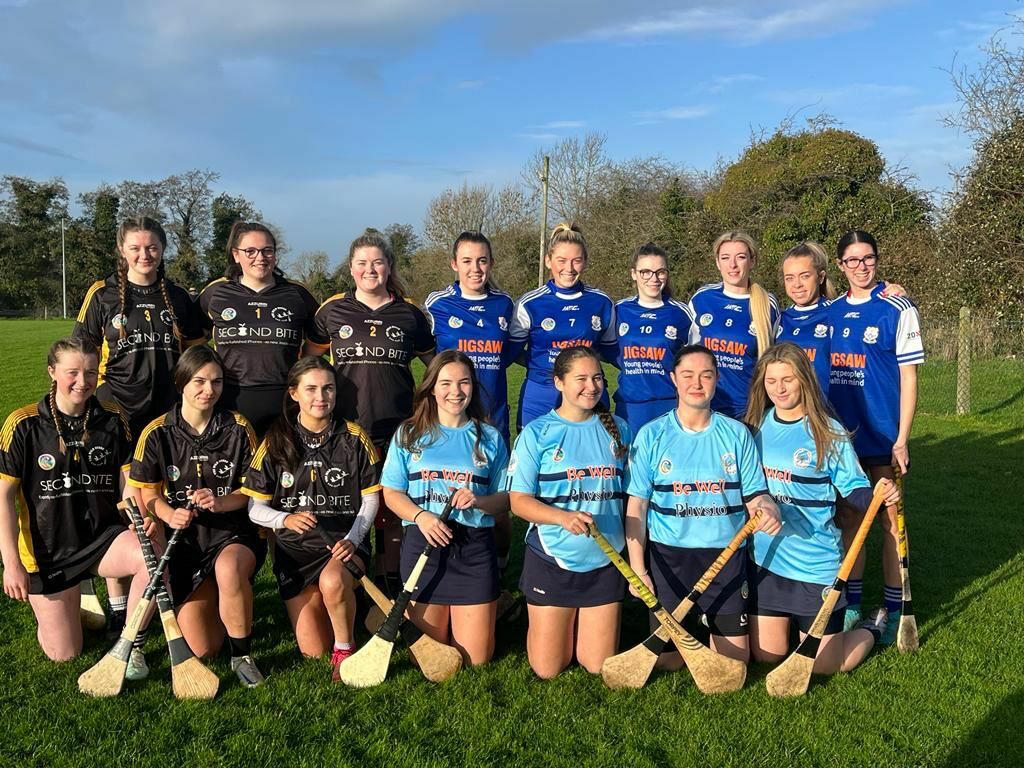 After topping their group the SFWG team had secured a home fixture against CBC seeking to reach the championship final. Wild Geese hosted this semi final with the team well supported once again. SFWG had the better of the early stages.

A point from Amy settled the nerves, this was quickly followed by a point from Shauna. CBC then began to come into the game and scored the first of their three points in the first half from a free. Some calm goalkeeping from Shauna ensured that CBC would end the half with no goals to show for their efforts.

Lynn slotted over a point to extend the lead to two points. CBC then replied with two pointed frees to tie up the scores. SFWG full forward line were struggling to break the shackles as they were being tightly marked.

However Libby was to provide the key to unlock the defence Five minutes before the break, she picked up the sliotar deep in her own half and evaded two challenges before striding forward, rather than settling for a point she played an inch perfect pass to Lynn who side stepped her marker before firing into the net.

From the resulting puckout Beth collected the sliotar, fed a pass to Abby who played a long sliotar not the defence, Amy collected the resulting sliotar and dispatched it to the back of the net. SFWG final goal of this crazy five minutes came from Libby from a free. The half time ended, SFWG 3:4, CBC 0:3.

The message at half time was to start the second half as they had finished the first and put the game out of reach early. The girls did exactly what was asked. Within minutes of the start, Shaun, Lynn and Amy found the back of the net to end the game as a contest.

The team regrouped with Kerry, Beth and Leah stepping up to ensure that the CBC attacks came to nothing. Amy and Lynn added further goals to stretch the lead further. With Siobhan and Caoimhe dominating the middle third of the field, CBC were finding it almost impossible to get any momentum.

Madison then got in on the scoring. With Nicole now switched to the full forward line, she prevented the CBC defender from clearing the sliotar, from the resulting pressure, Madison fired in the tenth goal of the game.

The final SFWG score of the game came from Siobhan as she collected the sliotar in midfield and strode forward before slotting over a point. Just reward for her efforts. CBC scored a consolation goal, to leave the final score SFWG 11:4 CBC 1:6.

Sixteen players took to the field this week and all played their part. Meabh in goal had her best game to date and is increasing in confidence game by game. Kerry once again demonstrated all her experience and her distribution of the sliotar is a lesson for all to learn.

In midfield both Libby and Siobhan dominated once again and must be the best midfield partnership in this years championship. Shauna provided much needed experience to the half forward line and all three full forwards, Lynn, Amy and Madison got on the scoresheet to demonstrate how difficult they are to contain.

However, one player shone a little brighter this week.

Caoimhe O’Brien’s performance was a joy for all to see. Playing on her home turf, she covered every blade of grass , shoring up the defence and setting up attacks. Her versatility was on show as she switch from numerous positions during the game. Clearly the outstanding player this week.

The team has once again this week defied expectation and recorded a super performance and resounding result. They are now one step away from a remarkable achievement. Standing in their way will be a rejuvenated Clontarf team. The girls know that they will need to raise their game once more if they are to claim the ultimate prize.

Playing the club lotto couldn't be any easier, all you ha...

We’re hiring🚨🚨We are on the lookout for a new 2nd team me...

U12s Camogie get a new sponsor

A big thank you to @glenveaghhomes for sponsoring new je...

Committee meeting reminder:At our AGM last Sunday, it was...

A message from our GPO Paul.A really worthwhile event tha...

We’re recruiting🚨🚨As we enter a new year, a fresh season ...

Get live information for Club on the ClubZap App